A controversial topic that doesn’t seem to have enough said about it is one that I’ve been examining in my head lately as I join my new department. The subject of “pulling meters” is one that varies from department to department, and I can’t help but wonder. With everything becoming so nationally standardized, why hasn’t this become standardized as well?

Let me begin by saying that there are many schools of thought on this, and the following is merely my opinion on the matter. I’m a big believer in safety and training and that EVERYONE goes home, and that’s what I am basing my opinions off of. 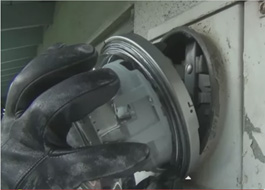 First and foremost, in ideal and optimistic conditions, we should have the utility company come out and disable the power to the structure. The utility company has the proper training, safety equipment, and knowledge to get the job done with little to no risk to the first responders on scene. They also have the ability to ensure the power is fully shut off to the structure.

Knowing that “ideal conditions” don’t always happen, whether it be due to response time or unavailability, there are ways to protect yourself. Give your crews the best chance of safety and survival if you do happen to have to disable the power to the structure yourselves.

Most important is proper training. If removing the meter is the policy or practice of your department, most utility companies are more than willing to put on a training class in all aspects of electrical safety. Usually, all it takes is a phone call.

After training, proper equipment/safety practices are second in importance.

With these tools under your belt, your first step is to inform dispatch, so they can inform the local utility company that the meter has been/is being removed.

The second step, if at all possible, is to turn the main off at the power box from the house. This takes the electrical load off the meter and prevents any dangerous arcing as the meter is removed. Be advised, this doesn’t cut the power. It just removes the load and makes for an easy transition as the meter is removed from its housing. After checking the meter to ensure that the load has been removed, an attempt to remove the meter can be made.

Believe it or not, there is a special tool made specifically for removing residential and commercial electrical meters. For a quick look, you can click on the link here.

One of the major benefits of using this tool is that it helps prevent meter glass breakage that can make your small problem into a much bigger problem. In addition to structural firefighting PPE, using gloves rated for high voltage and standing on solid ground is a must!

One of the schools of thoughts I’ve discovered is that meter removal is a job that falls on the Chief or OIC. The reasoning behind this is that taking the responsibility as the Chief/OIC takes it off the shoulders of the other firefighters. The problem I see with that, however, is that it’s still putting someone at risk when it may not be necessary. If the Chief/OIC does happen to be injured while pulling the meter, the focus shifts from the structure fire at hand to the injured firefighter.

You must understand that just because you pull the electrical meter, it does not mean the power is completely removed from the building. Electrical theft is becoming more and more common in low-income settings and completely bypasses the utility company’s meter to the structure. Even though you’ve removed the meter, crews should still treat all electrical as if it is still energized as a precaution until it has been confirmed by the utility company.

Lastly, I’ve heard it said that some departments don’t have a policy on meter removal and most likely won’t have one until something happens. From a department’s standpoint, this is a terrible attitude to have. Waiting on an adverse event (reactive)

instead of anticipating one (proactive) can create “knee jerk” policies that become unfavorable to operations and other policies, but that’s a whole article in itself.

I want to hear your feedback on the protocols and practices you have in your local jurisdiction. What are your department’s policies? Do you agree with them?

DISCLAIMER: This article is an opinion based article and is in NO WAY meant to be used for instructional and training purposes.

Jon grew up in the fire service. His father was a firefighter for 17 years, thus cultivating his love of the emergency services. Straight out of high school, Jon joined the military as a Navy Hospital Corpsman, volunteering as an 8404 Fleet Marine Force Hospital Corpsman. He was with 1/24 Marine Reserve unit out of MI for a short time before volunteering for a deployment to Iraq with 3/24 in 2009. Since coming home and finishing his military service, he has worked in multiple family practice, ER’s and urgent cares before getting licensed as an EMT-B and settling into his passion of Fire/EMS.