My husband was diagnosed with prostate cancer 27 months ago.  The shock and awe of hearing, “yes, it is cancer” is the most powerful, helpless feeling we’ve ever 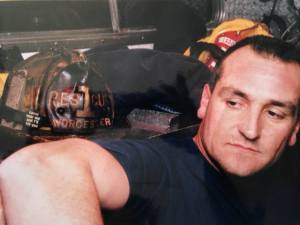 had.  Paul’s cancer was a Gleason 7 score on a scale of 1-10.  For forty-five minutes the doctor talked about options, and what he would do if it were him,  what comes next, etc.,.  We didn’t hear a word.  We were in shock. Paul’s too strong, too healthy, too big for cancer. This can’t happen to us.

Paul had robotic radical prostatectomy surgery by the best. Dr. Tuerk at Saint Elizabeth’s Hospital in Boston.  We knew there most likely would be side effects of the surgery, but all we wanted to hear was that he got it all.  The surgery was successful, but he requires blood work every 3 months and is unable to perform the duties of a firefighter due to the effects of the surgery.  When the realization of his not being able to return to the job he loved so much began to set in, it was a heart-wrenching chapter in our lives.  This was not the way Paul was supposed to leave the job. He lived for this job.  His crew from Worcester (MA) Fire Department, Rescue 1 gave him the best retirement party possible. Full of skits, awards, and his ax.  But it was ten years too early.

I couldn’t understand how a guy like my husband, who was so fit at 55 that he boasted about being “only one of two guys on the job that can climb ‘UP’ the 3 story fire pole”.  With two brothers and multiple male first cousins, with no prostate cancer history, how could someone so healthy get cancer?  I started researching firefighter cancer. This was around the same time the Boston Fire Department came out (here) with their video about guys they had lost to cancer. It was shocking how prevalent it was. We’ve been in this for twenty-eight years. We knew a lot of guys with cancer.  That video led me to start researching the gear itself. I guess that’s where the rabbit hole opened.

1 Structural Firefighting PPE reports as I could find.  What I found in those reports was concerning to me.  Of 16 voting members of the committee, 9 are manufacturers themselves.  That didn’t sound right to me
but what do I know.  In the Report of Proposals from the NFPA meetings, I read how the Special Experts would question the manufacturers and protest certain aspects like their testing methods or particular standard tests all firefighters should perform on the gear, then everyone votes and the manufacturers seem to win more challenges than losing in my opinion.  There should be a better balance in the committee.  We’ve gotten too close and trusting of the manufacturers.  Remember, their first obligation is to their shareholders.

A couple of months back, I was contacted by someone very well known in the environmental field, (as I had reached out to her some eight months earlier).  She had clusters of firefighters with cancer.  My reply was “I’m sure you do, every station has a cluster.”   She asked one question about the gear, “does the gear have PFOA or PFOS?”  I never heard the word before.  I said I would check and let her know.  After countless hours of research, I was able to find that PFOA is a component of the fire gear itself.  The fabric is made with Terephthaloyl Chloride and p-Phenylenediamine.  It has the chemistry formula C8, H4, Cl2, O2.  The C8 is the problem, PFOA.  Perfluorooctanoic Acid.

So why the heck is C8 a component of fire gear? If firefighters sweat and stew in these suits, surely it must be absorbed through their skin?   What I found was an even deeper rabbit hole.  The C8 is needed to meet the minimum Thermal Protective Values (TPP) that protect firefighters from the thermal dangers of the job. It also makes the gear very strong.  It is the same material used in bulletproof vests for the military as well as an additive to aqueous film forming foam.

But, just a quick Google search will show the many toxicity issues, human and environmental, surrounding PFOA. The EPA has given it the designation of ‘Contaminate of Emerging Concern.’ Sounds wishy-washy when you read the studies showing the actual scientific evidence from around the world.  The problem here in the US is the Toxic Substance Control Act hasn’t changed in years.  There is lobbying against any changes in the current structure in favor of the chemical giants. 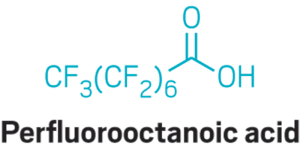 EU lawmakers have approved a new chemical law aimed at making producers and importers of chemicals, used in goods such as personal care products, prove that the substances they put on the market are safe for consumers.

restrictions do not happen there in Europe or here in the US.

After a search of the European Chemical Registry’s site, I saw that firefighter PPE was on the list of textiles for restriction by the European Chemistry Agency or ECHA, as it had determined it was an SVHC or Substance of Very High Concern.  The gear is made with the chemical C-8.  The chemical companies stated in the ECHA ‘comments in response to proposed regulations’ that the alternative C-6 costs them exponentially more to make.

That led to the search of what firefighters in Europe are doing about it.  I came across the 2015 announcement of a PPE & Duty of Care Forum 2016.  It covered *Managing a potential transition to non-PFOA PPE.  Europe is aware and already on the path to transition to something safer for their firefighters.

They didn’t want to use the alternative C-6 in Europe as it costs more to make. Affecting their bottom line. Keeping us in the dark for as long as possible, while lobbying against changes to the Toxic Substance Control Act here in the US, will save them money. The chemical companies are beholding to their shareholders to show them growth and profit. The manufacturers are using the American Chemistry Council to lobby against change in our chemical standards in America.

The chemical/textile giants were asking for a ‘derogation’ for the items of Firefighter PPE, military style vests, and some medical equipment.  The ECHA declined to derogate the FF PPE, but it did give the manufacturers until 2020 to come up with a product not more than 25 ppb of PFOA. That would require the manufacturers to rework the chemical component of the gear.  That is up from the original request of the ECHA’s of 2ppb.  This paragraph, page 37, shows the ECHA ruling:

“A goal is replacement of C8 chemistry by less hazardous chemicals (fluorine-free alternatives are
said to be available by one stakeholder), or reformulation of C6 chemicals to resist
heavy duty washing. Available information suggests that C6 alternatives that can resist
washing and outdoor exposure are increasingly available.
Overall, given the critical human health/life protecting functions of the C8 chemicals,
and the above consideration on cost and effectiveness of substitution by C6 chemicals,
SEAC proposes an extended transitional period of 6 years after entry into force for
textiles for the protection of workers from risks to their health and safety.”

Keep in mind, part of the process in Europe was to notify the manufacturers and give them an opportunity to comment or protest these changes. That was in 2014.  The actual comments were published in 2015.  It is almost April of 2017 and we still have not been told that PFOA  is such a concern in Europe it is changing the way the textile giants make the gear.

This past January I began asking whether or not we were making those changes here.  I couldn’t get

an answer from anyone official or otherwise.  No one had heard of it. It wasn’t in a discussion on any of the countless popular firefighter websites, not on any government websites, or the IAFF site.  Zero information or discussion about Non-PFOA Firefighter PPE anywhere.

What really bothered me was that it wasn’t discussed at any of the NFPA 1971 Structural Firefighter PPE meetings that I read the Report of Proposals from, back to 2006.

facing in Europe.  The PPE manufacturers all still printing slick, glossy ads about their gear and the dangers of cancer in the job. They are reinforcing to firefighters the standard safety protocols of washing and inspecting your gear and your body, of not contaminating your families, of wearing all your gear during overhauls, keeping your gear out of UV light, but the discussion of the toxin PFOA and what they are being required to do in Europe does not come up.

There is no justifiable reason to not discuss it. It is as important as knowing about the soot on the gear, or washing your hoods, or washing your bodies and all the other cancer precautions relative to your job.  With the money that firefighters pour into these manufacturers and the faith that we entrust them with, it is outrageous that this discussion is omitted.

Weeks ago I began posting about this on my personal Facebook page and sending this to over 200 Facebook firefighter pages.  Thankfully, one lone Local Union President, Jason Burns L1314, of Fall River, MA asked if I would send him the information I gathered.  He had recently lost two young members to cancer.

During the IAFF Legislative Meeting in Washington, D.C., March 3-8 2017, IAFF L1314 President Burns brought the matter to the attention of IAFF’s Patrick Morrison, the Health, Safety and Medicine Assistant for General President Schaitberger.  At this time he is awaiting word from this officer.

This past Friday my husband advised me that Senator Ken Donnelley was a firefighter and a cancer survivor.  Paul had met him in 99 as a family liaison during the Cold Storage Warehouse fire. He said I should call him.  I did, and spoke at great length with his Chief of Council, David Swanson who advised he will be speaking to the Senator and Chief of Staff.  By Monday the reply came from David Swanson, both Senator Donnelley and Mr. Swanson are looking into this issue. IAFF L1314 President Burns advised me that he will also be in communication with the Senator.

It’s very concerning, the cumulative effect of putting on the gear day after day, year after year. In addition to added absorption rate, a firefighter faces as their body temperate rises. In Europe the response of one manufacturer regarding dermal absorption of the PFOA to a group of firefighters

Was, ‘it’s not really that much.’ Wonder how many days, months, and years he’d like to wear that suit.

We need legislation to force the chemical giants to act immediately.  To produce the same standards here as are now being used in Europe. These manufacturers should be under a requirement to advise when their materials sold here in the US are restricted in another country.  This has gone on for too many years.   The arms of the American Chemistry Council are long and reaching. That alone is a problem.

To share the knowledge of what is happening in Europe as well as studies and reports, I created a Facebook page titled, ‘Your Turnout Gear and PFOA.’  It will be updated with any information I can pass along.  Link:  https://www.facebook.com/Your-Turnout-Gear-and-PFOA-1808869939437081/

33 Comments on The REAL Cancer in Your Gear