Do you ever stop and think how your actions will affect someone in 20 years? Has it ever crossed your mind that just one thing you did today could be the defining moment in someone’s life? Would you believe that a simple firehouse tour and a hot wheels fire truck could put a spark in a kids heart that will last their entire life? I will tell you first hand, it happened to me. At a young age, I took an interest in being a fireman as most kids do. I had the usual toys and fireman costume that you would find in most homes. But unlike most kids, I never grew out of my fireman phase. My parents, seeing that this wasn’t just a typical childhood dream, stoked the fire that was building in me.

While my father was in the Marine Corps, he became friends with a Marine who happened to be a local volunteer fireman. They got together and worked it out so we would come take a tour of the fire house. Little did he know that his actions that day would set the course for my future. From that day forward, my desire and passion for this job grew and grew. Every time a fire truck would pass us in the car, I was glued to the window. I stared in awe as they raced by, lights and siren wailing. I had a fireman themed birthday, complete with an engine company from the local fire department. My parents went as far as buying a Dalmatian, and of course we had to name him Pongo. There was no doubt that this kid was going to be a fireman.

Unfortunately, as quick as my mentor came into my life, he would soon be leaving. Both my father and he were retiring from the Marine Corps, and our paths would not cross again for many years. But before he left, he invited my parents to a farewell party. I don’t remember much of the party due to my fascination with his fire memorabilia he had in his office. The only time I was drawn away was when his pager went off for a call. Then I was glued to the front door as I watched him drive away. Once he returned, I was so excited to hear what happened that I bombarded him with questions before the front door even closed. But as fate would have it, all good things must come to an end. Before we left, he went into his office and took a small silver fire truck off the shelf. He handed it to me and with a smile he said, “Here Buddy, I want you to have this.”

I still have that toy fire truck to this day. 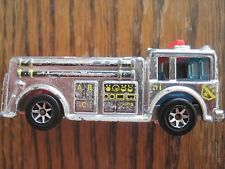 Fast forward about 20 years and the impact from that day is still going strong. I got my first taste for the job when I joined my local Explorer post. I learned that it took a lot of hard work, long hours and sometimes sleepless nights to be a fireman. But I loved every minute of it. During my time as an Explorer, I was so influenced by another fireman that the flames were raging in my heart. He is a 20 plus year veteran and currently a Captain. He would be the one to teach me the love for the job and all of it’s traditions. He taught me how the old-timers did things and never missed an opportunity for a history lesson. But the one thing that stands out the most is the day he told me I would make a good fireman. Some may see this as just a small compliment and think nothing of it, but for me, it meant the world.

Eventually my time as an Explorer came to an end, and I joined my local volunteer fire department. I’ve been volunteering since 2012 and have worked hard to learn my job and make a good reputation for myself. Some point along the way I made the transition from little brother to big brother. I am the guy many of the new rookies come to for advice. I can see that they have listened to my rants on taking pride in your work. I can see it in how they store their gear or how they load hose. They are becoming good firemen.

Our actions on a day to day basis can have lasting effects for a lifetime. Are you that big brother your rookie looks up to? Will you be the fireman that the little kid remembers 20 years from now who sparked their desire to be a firefighter?

Special thanks to my parents who always supported my dream to become a firefighter. To Lt. Lenny Stoleburg for being the one who started me on my journey and Capt. Jeff Kerley for teaching me what it means to love the job. Without you, none of this would be possible.

Bryan Cramer is a Firefighter/EMT-A in the foothills of East Tn. He has been a firefighter for 4 years. He started his fire service career as a explorer at the age of 14. He works as a full time firefighter, a part time firefighter, and volunteers for his community fire department.