I Wanna be in charge!

As a firefighter seeking a way to promote to the supervisory level in a fire service organization you have to realize that it’s not about what you do; it’s about what you don’t do. It’s about the little things daily that are not attended to; The little things that in reality don’t amount to much and may seem trivial, but collectively add up to define who we (and you) are as an organization.

The problem with this is that many firefighters never understand this concept until they are in a position of management and see if for themselves. Typically, 12-18 months after appointment as a manager, company officers find themselves sitting in their office completely overwhelmed. They simply cannot understand

why their company is not performing well. They sit in dismay behind a wrecked desk of piled up projects that seem insurmountable. They contemplate and question the integrity and commitment of their own team while the rest of the company strolls along with no stress at all and oblivious to any problems.   Deadlines are missed, tensions rise, and senior staff cannot understand how or why we struggle to accomplish the simplest of tasks to maintain our core values. And then the unbelievable happens, service levels are impacted for the worse and nobody can explain what happened.

Every officer walks into the position with the exact same dreams and goals. They want a cohesive group of firefighters that gets along very well. They want big fires that magically go out at the mere appearance of the company. They want to have fun. They want their co-workers to name their children after each other. Unfortunately, all of this is a dream, and not how it typically works. Time and time again I have witnessed this disaster unfold. No matter what the company makeup is, there is always trouble ahead for company officers. I challenge anyone to find me one company officer that says it was a cakewalk. Yes, dreams can be realized, but only after the initial trauma of becoming an officer heals and they recommit to their guiding principles that got them there in the first place.   There are no officers that were bad or even average firefighters. Every officer I know performed at an EXCEPTIONAL LEVEL as a firefighter.

For years I have struggled to convey this message in a meaningful manner that would be easily interpreted by senior members of the organization looking for a path to management and eventually leadership. Over my career as a company officer and chief officer, I have sat with many firefighters seeking my advice and feedback on “what they need to do to become an officer.” Aside from the normal education and certification requirements, my answer has been consistent with every conversation. Start today by demonstrating some simple leadership. Let your principles and traits shine through. There is no magical bullet. There is no inside information, it’s that simple.

It’s Who You Are

The fact is, your interview for the position of manager started the day you walked through the door as a rookie firefighter. Becoming an officer is a really big deal, and it should be. But, becoming a firefighter is a bigger deal as the daily decisions you make will affect you for the rest of your career. You will make mistakes. And, you will have “off” days as a firefighter. But, how you respond to the occasional mishaps and feedback throughout your career will define how you will be as an officer.

How you ‘consistently’ attend to your job as a firefighter or driver will define who you are and is the best indicator of your potential as an officer. So, my first piece of advice is, “Start today, and be the best at the job you’re being paid for.” After many years of doing this job, I think I have developed an ability to spot an officer after their first 6 months. Trust me, it’s that easy. It’s a characteristic that is genuine and cannot be faked. That doesn’t mean people cannot change. But, some people get it from the first day.

There are no conspiracies or strategies to unlock to becoming an officer. Being an officer is just like being a firefighter. It’s not what you are, “it’s who you are.” It’s a personality, not a job.   If you think becoming an officer is about taking a test, passing a set of exams, and charming the heck out of an interview panel you’re very “VERY” wrong.   It just doesn’t work like that. It cannot work like that, there is too much at stake.   This is why being an officer starts today, not after receiving a set of bugles.   No matter how well you do on an exam, your traits and habits that you have demonstrated over your career will be revealed in the “process.” And, you cannot trick the process.

So how do you start? It’s not about what you do day-in and day-out. Unfortunately, it’s more about what you don’t do. You, your company, your station, and even your department will be defined by what YOU DON’T DO.   Anybody can extinguish a fire. Anybody can deliver EMS. Anybody can get through a shift with nothing broken and nobody hurt. If you don’t put out the fire, or keep your apparatus in top shape, then you will be defined by those missteps. Departments that struggle have people sitting on their butts whining about the daily whatever. They have firefighters with no initiative that blame the “system” on their attitude.   Who are those departments? Those are the ones that appear on the daily TV news with their aerials in the air, or a dramatic situation that has nothing to do with providing this valiant service to the public.

So, here’s my 2nd piece of advice. Don’t look for praise when you do something that is expected. Taking out the trash is not going to get you a set of bars.   You should seek praise when you do something unexpected (for you) that benefits the organization. It’s more about the simple things you do when you’re not looking for praise or recognition.   I promise people (especially the senior leadership) will notice things are being tended to.

If you’re sitting around the station waiting to be invited to do something, then you’ve missed the leadership train. If you’re waiting for directions from your officer to do “anything outside of the normal,” you’re screwing up your officer interview.   If your officer is drowning at his/her desk as you sit and “study something” on the computer, then you’re missing a huge opportunity.   If you pass up an opportunity to work some overtime or attend training, you’re missing another opportunity, and it’s noticed. If you’re not the one that is leading the way on the simplest of daily tasks or new ideas, then you don’t stand a chance to promote in any organization. 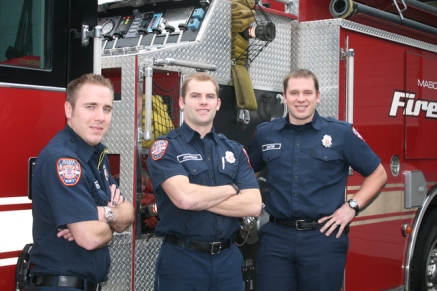 So what am I talking about? Take out the trash without being told. Clean anything if it’s dirty. Double, and even triple check your tools and equipment. Train on something. And by train, I mean get your hands dirty. Pull hose, climb ladders, dress up without asking for permission from your officer.   Become an expert “on your own time.” If something is in disarray, then be accountable and take the initiative to fix it. Establish very high expectations in regards to your station and apparatus. Ask the tough questions to yourself. Don’t depend on others and get over the barriers that keep you from accomplishing something. Do not wait on others (officers) to approve of your routine actions around the station.   Answer emails, take on projects, complete assignments and be dependable. Trust me, people notice when it’s not done. Tasks not performed, training not completed are very noticeable.   Not to mention hose loaded improperly.

And finally, above all.   Be accountable to maintain the history of the organization. If we clean kitchens on Monday’s, then you be the one to ensure it’s done. No one cares why or why not we do something. If history dictates the routine task, then honor it.   If the trucks are to be clean at all times, then be the one to grab the hose and bucket first. If for no other reason than honoring the traditions of our past members that built these fire departments.   Remember, if you don’t do it people (especially those responsible for promoting you) will notice.

I frequently sit in dismay wondering why a firefighter in any capacity would accept anything sub-par. I think the answer is complicated and the reasons vary. But in general, I believe many just take it for granted and don’t evaluate the value and the potential of something simply defining who they are, or how they will be as an officer.

It’s your fire department, and your interview for the next step started a long time ago. Don’t take anything for granted. I have witnessed the smallest miscalculations remove a person from the process long before they ever even applied to be an officer. So please, stop waiting for an opportunity to come walking in and create your own opportunities through your daily “simple” actions. If you’re waiting for an officer to “create an opportunity” for you then clearly you’re not ready to lead.   Opportunities are everywhere, so don’t underestimate anything, get up and DO IT.