Please note: This “Mutual Aid” profile has been created to request articles from other writers and authors in the fire service who are willing to share their knowledge with our followers. With that being said, these articles are un-edited for content/language and viewer discretion is advised.

I saw a speech today by Battalion Chief Curt Isakson. If you haven’t seen it, you need to. Talk about a guy who is passionate and prepared! Today I want to echo some of his insights and challenge everyone reading this to think about being a bulldozer. Chief, I apologize if I get any of this wrong, this is just my take on what you said. Chief Isakson is a true student of the job. He doesn’t just study our trade; he owns it. 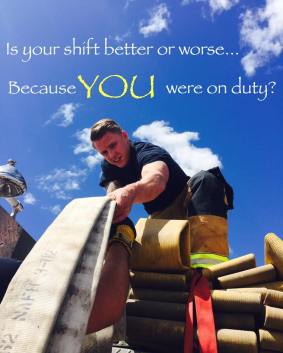 One of the key topics the Chief brought up that has stuck with me is being a bulldozer. He is talking about going into the fire building and aggressively pushing your way to the seat of the fire. Now a quick side note for all the Facebook fire veterans that are going to shout and say, “Not this aggressive stuff again. Fires today are more dangerous than they used to be. We need to be safe!” First of all, shut up, get off of this page and do some real training or get a new job. If you don’t understand the difference between being aggressive and not being a moron, then MY fire service is not for you. I don’t have time for your bullshit. And yes I said my fire service. I am owning this; I have bought stock, and I am a contributing partner in the future of this job that I am so blessed to be a part of.

Now that I’ve hopefully cleared the room of all the wannabes let’s get back to the bulldozer. The Chief mentioned heading down that hallway and operating your nozzle on the move, using the stream to bulldoze that smoke and heat out of the way in order to push to the fire room. He’s not talking about penciling the ceiling! Not talking about moving in 5 feet, blasting the ceiling for a while, and then moving in another 5 and repeating. This is all out war! Open the bail, grab on to your nether-regions, and start pushing and flowing. I don’t care if it is 1¾” line or a 2½”. If the fire is pumping, then we need to be flowing the proper line in the right place as we move to the seat of the fire.

I can hear all of the nay-sayers starting on their excuses right now, “But how do you expect me to flow and move at the same time? We can’t do that; we only have two guys on the line. It’s easier to move the line if we’re not flowing.” If you have questions or concerns about how to flow on the move, contact the fire academy that I help teach. I can find about a dozen 18-20-year-old college students that can show you how to flow and move.

We as a fire service love to preach about safety, safety, safety. Do you want to see a safe fire scene? Go to the August 1995 edition of Fire Engineering Magazine. It has a picture of a safe fire scene. For those of you who don’t know what I’m talking about, the cover is blank. That is our safest fire scene, nothing. No house, because it could be burning, no front steps because “Johnny Firefighter” could trip, no hose because it could rupture, no truck because some idiot might not wear his seatbelt, no scene because, in this job, things can happen. Do you know how we make a fire scene safe? By aggressively attacking the fire. If we decide that we are going to make an interior attack, we need to make an interior attack like a bulldozer! Go in and be the baddest mother that ever entered a building. There should not even be a need for me to use the term aggressive. Aggressiveness is implied by me saying that we are at a fire. The same thing applies to a defensive fire. If I decide to hit it from the outside, can I not do that aggressively?

How do we make the scene safer? We show up and we aggressively attack the fire, whether offensively or defensively. We aggressively occupy space and search for victims. We show up ready or likely to attack or confront the problem which we were called to the scene for. Can you imagine if our military leaders had to tell the soldiers fighting overseas to be aggressive when they fight? It wouldn’t make any sense; the nature of their job necessitates aggressiveness. Does a football coach need to tell his players when to aggressively move the football? Or when they are on defense, does he need to tell them to aggressively stop the progress of the ball? Just in case you’re confused I will answer it for you, the answer is NO!

I’ll leave you with these thoughts for the day… If you show up to a fire, and the decision is to go offensive, is there a reason not be a bulldozer? Is there a reason not to be ready or likely to attack or confront? The people that we are sworn to protect deserve our best effort. They deserve to have firefighters that show up on the scene ready and likely to attack or confront. Be safe, be aggressive, and most importantly train!