I recently did a bunker gear demonstration for a small group of kindergartners. As I was talking about all of our gear and placing it in the perfect position to execute the most epic bunker drill of my career, a little boy asked me, “Why are your boots so shiny?” With that simple question, a flood of answers came to me. None of which would be understood by a kindergartner, but would rather be understood by up and coming firefighters.

Why are my boots so shiny? It goes much farther than the time it takes to add a little bit of black shoe polish and water to a cotton ball. It goes farther than the circular motion you make when covering the toe of the boot with polish and creating a shine. There are many reasons why my boots are so shiny; honor, compassion, and integrity. These are the reasons why my boots are so shiny.

My boots are shiny because I am honored. Honored to be in a profession where I can help people in every way, day-in and day-out. Whether we are helping extinguish a fire, cutting someone’s loved one out of a car, or just helping up an elderly person after they have taken a nasty little spill. When I was in the military, a Staff Sergeant opened my eyes to showing honor. We were talking one day, and he asked me if I had seen the first 15 minutes of Saving Private Ryan? I replied, “Yes, of course.” Who can forget the scene of hundreds of young, brave Americans getting ready to put their lives on the line on a distant shore only to be met with explosives and gunfire? After I gave my answer, he told me, “That’s why we press our uniform and shine our boots.” I have taken this advice with me into the fire service because there are countless firefighters that have put their lives on the line and have lost their lives doing this great job. Having shined boots is just a reflection of the honor that I give to all those who have paid the ultimate price wearing the same boots as I do.

Every young Firefighter wants the big call. The call that is going to separate the lions from the lambs. The call that is going to require them to utilize all their training, but the reality is, all fire departments are not Ladder 49. We are all made up of fire departments that are may run one call a month, or run 100’s of calls per week. Some of the most pivotal calls we may have is the time we have care for a person who just needs a hand on their shoulder and a voice saying that everything will be alright. It is on these calls were our compassion goes a long way. I would like to believe that as our patient sees us walk in with all of our medical equipment and shined up boots, they think “If these professionals care that much for the shine on their boots, imagine the care they are going to provide me.” Hopefully, this silent response will be enough to put their minds at ease.

During the beginning of my career, I would get teased about shining my boots. They, of course, did not know of the “Saving Private Ryan” story. I would hear things like, “give it six months and you won’t be shining your boots anymore.” Or, I would hear, “they’re just going to 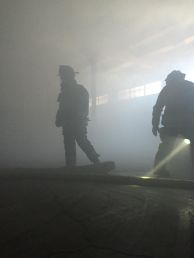 get dirty anyway, so why shine them.” Yes, they did get dirty, especially after a vegetation fire, or after walking through a field of mud for whatever reason. After all that, guess what I was doing later on that shift. That’s right…polishing my boots. I did this because I knew that I had set a standard for myself, and I wasn’t going to allow anyone to take that away from me. Even if no one noticed my boots, I knew that my small action reflected doing the right thing even when no one was looking, and that is the definition of integrity.

I know that shining your boots is a small gesture, most of the time it gets overlooked. The beauty of this is not in the shine of the boots, but in the ability to do your best on a seemingly inconsequential task. If you do your best on this small task, imagine the HONOR, the COMPASSION and the INTEGRITY you will display on a task that requires you to make life or death decisions.

2 Comments on Why Are Your Boots So Shiny?