It’s 3 AM on Sunday morning, you are sleeping soundly, in your bed, at the firehouse. At 03:01 you are very loudly awoken by tones that tell you a fire is burning, and you need to go. You put your feet on the floor, make your way to the truck room, and begin to don your turn-out gear as the driver opens the overhead door and starts the diesel engine that powers your fire apparatus. All four members of the crew take their place on the rig, buckle their seatbelts, and begin to think about what part of their district they are running to. As the truck makes its way toward the dispatched address, that familiar glow and smell of smoke tell you that you will be working soon. Around the corner, flames are visible, alpha/bravo corner of a single story, single family residence in a newer sub-division. The officer assumes command and begins his risk-benefit analysis, makes a tactical decision based on that analysis and begins to issue assignments to his crew and the other trucks arriving to help. You have done this many times; your crew has done this many times. This is a scenario that can happen to any of us, anytime. We will, no matter our position on the crew, begin to address the scene priorities the way we have been programmed. Life safety (ours – theirs), incident stabilization, and property conservation. I would like to discuss some things to consider in these “bread and butter” type fires that may have changed over the last decade. 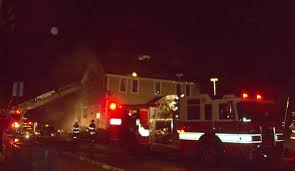 One of the very first “case reviews” I remember being exposed to, was about a fire that is still studied today. Twenty-Seven years ago this month five firefighters lost their lives fighting a large fire in a Ford dealership in Hackensack, NJ. After the fire, an investigation showed several mistakes that had been made. Mistakes in communication, command, and recognition of construction type were sighted. Hackensack Ford was a large, commercial building, of bowstring truss construction. The failure of the truss system led to a collapse that ultimately cost these men their lives. This tragic loss of life brought about sweeping changes in how we set up IC, and made basic knowledge of building construction priority on the fire ground. If you have been in the fire service very long, you know this case, you’ve hopefully read about it, and the dangers of that bowstring truss are burned into your brain. Traditionally we have thought of truss systems as being found in commercial structures. We all have heard the phrase “never trust the truss” and most of us show an extra degree of caution when dealing with them. However, it seems that more and more of these lightweight construction features are being found in homes.

In this article, we will take a look at what I call traditional construction vs. newer construction and see pictures of each. Once again, I am not Frank Brannigan, but these differences are worth a look.

We see a trend of open spaces and less compartmentalization in today’s newer homes. This change is largely due to builders using open web trusses and engineered wooden beams, rather than dimensional lumber.

As you can see these trusses allow for wires, cables, and duct work to run through very easily. The open web floor truss will also support longer spans than does dimensional lumber.

The difference in fire control and extinguishment between these two types of construction is miles apart. However a fire in the truss void space yields very different results. This fire would have access to more space, more oxygen, and LESS MASS. The “less mass” part of that scenario is the one fire crews must take into account. Less mass=faster collapse. Another building component that has been used for years, but has made substantial gains in recent use is the “Engineered Beam”. 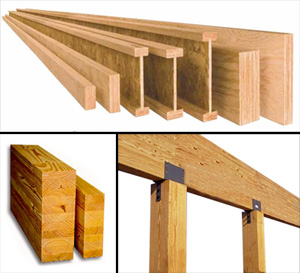 These beams may be a piece of OSB stood on edge, between two solid pieces of lumber, or an LVL (laminated veneer lumber) sometimes called “GLULAM”. While both of these types of beams exhibit excellent load-bearing across long spans, from a firefighting aspect, we must be aware of their limitations.

These beams will present the same “less mass“ problems that the trusses do and are built using glue that may cause accelerated degradation under fire conditions.

You must also remember why these types of structural members are being used. Cost is a factor, but the main reason is to create larger open spaces inside the home. These large open areas, taller ceilings, and fewer compartments need to be planned for. Fires in larger spaces, filled with synthetic materials, that produce a higher HRR (Heat Release Rate), that are attacking structural members that have less mass could be a recipe for disaster.

Another feature that is worth a mention is what my department calls “bricks on sticks.” This refers to a faux chimney being built above the roofline and is supported by 2×4 “stilts” in the attic. When we see a brick chimney coming through the roofline of a house, the natural assumption would be that the chimney is made of masonry from bottom to top. While fighting a fire in a newer home, we experienced an unexpected collapse of a chimney, which led us to find out why. Here are some pictures of the type of thing we found to be common in newer homes. 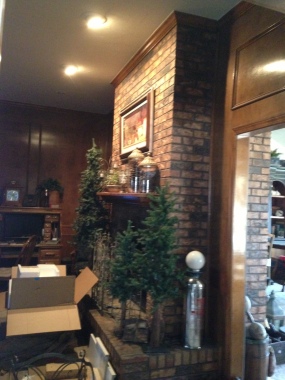 This is what the fireplace looks like inside the home.

A simple metal chimney inside the attic space. Notice the two 2×4’s attached to the roof, and the ceiling rafters, and no masonry above the ceiling and through the attic.

On the roof, we find a full brick “faux” chimney supported only by those 2×4’s and the roof deck itself. Imagine the surprise of fire crews should something like this overload the roof and end up on division 1 during a fire attack.

The only time that any of these (or other) lightweight features can be seen with little effort is during the construction of the structure. Once the building is complete, interior and exterior finishes will hide these construction practices. I have always enjoyed watching things being built. Houses, apartment complexes, shopping centers, warehouses, it doesn’t matter, I like to see the various stages of how things are built and how it may affect me or my crew. I am not an engineer or an architect, but sometimes I see things during these construction phases that make me ask questions. Lately a trend of lightweight construction in homes has caught my attention. There are some tactical considerations that must be made for any lightweight construction building, especially residential. This is why a pre-fire planning program has become even more essential to what we do. Keep in mind, getting on your truck and going out to look at buildings being built is pre-fire planning. While significantly less formal than showing up to do a hazard inspection and draw a plot plan, I find this method to be equally or even more helpful.

So, it’s 3 AM, and your crew has been toned out to fight a fire in a single family dwelling. Be sure that you have educated yourself and are prepared if this “SAME FIRE” you have fought 25 times, happens to throw you a curve ball.