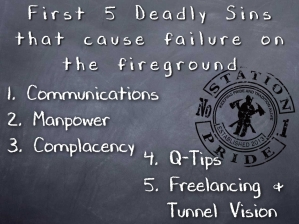 More than once, each and every one of us have been on a fireground that was absolutely chaotic. Whether it be in a state of disarray from the get-go, or operations were going smoothly and control has been lost due to one reason or another. That is the question. Do you remember the last time you were on a fireground that everything went smoothly? Those are the ones that stick out in my mind more-so than the scenes that were complete chaos. A fireground with no problems is almost thought of as a unicorn. One that is always dreamed about, but is never seen. For the purpose of this article, we will use the word "never", and think of it as "seldom," or "hardly."   We will also use the name Joe Schmoe as your brother in battle. Joe has the best intentions,  he doesn't always do the right thing at the right time. Poor Joe. We all have one, it's up to you to know who he is.

After a lot of thought and tribulations, I have compiled a list of 10 Deadly Sins that are reasons why there are failures on the scene of an emergency. Whether it be EMS, Fire, rescue, or TRT, if any of these items occur, there could be an absolute break down in progress.

How many times have we been on a fireground Tac-channel, and "Joe" is on scan?   Better yet, what about when he hadn't changed over to fireground operations at all? We all want to smack that guy, just to get his head in the game, but it happens. Now, what if Joe was the OVM, and interior attack is screaming for vent? What if he needs to bump up the pressure on the line?  Joe better get his act together! How about the good ole' fashioned battery chirp.  The one that comes at the absolute, most inconvenient time while operating at a scene? Yep, that breaks down communication because not only can you hear the annoying chirp, but so can everyone else on the fireground. Trust me, we are all looking to see who "that guy" is.

Whether career or volunteer, getting personnel to the scene is a logistical nightmare.  Volunteers can never predict how many bodies will respond, and career departments sometimes don't have the funding, and are operating at minimal or under-staffing. It's a double-edged sword. A good incident commander can overcome this by performing the correct job functions, at the correct time. Mutual aid can be considered, if not for the incident itself, but for back-filling your empty stations. At least get them coming. They can be cancelled later, if they aren't needed. Luckily, manpower is one of the easiest sins to overcome. You'll see why when we get to the rest of them.

Joe doesn't need to wear his full PPE on this AFA activation. It's always a false alarm. Does false alarm mean the same as unknown activation? Or should I say, does an unknown reason for activation constitute a false alarm?  Without going into tactics, I would bet most would say PPE, and investigate, investigate, investigate.   We all have our Joe's, but this one should never happen if we strive to call ourselves professional firefighters.   If we were plumbers, wouldn't we want to be the best damn plumbers out there? So we can get more clients, and make more money?  Well it's the same for the fire service.   Go to work, DO YOUR JOB, and provide the highest level of customer service possible to get the job done correctly the first time.  And don't go back to the scene later in the tour, just because of your own fault, Joe!

Now this one isn't going to make me popular with the white hats, but it's not always their fault. A leader can be anyone in the organization, from the bottom to the top. It takes that one special person to pick up the reigns and plow the way. With that being said, sometimes we don't need idea-creators. We need workers. We need the collective coordination of ideas to come from ONE person, on ONE radio frequency, at ONE time. The confusion doesn't usually come from having too many tasks, but rather, having too many people giving their own personal opinion about what should be going on at any given time. Too many plans at once is much worse than in a coordinated effort (Plan A, Plan B, Plan C...). This way, there's no arguing, and no personal agendas that are left unfulfilled. Both of which create poor attitudes, impatient subordinates, and grudge-matches. And Heaven help me if I say the term "micro-manager." I'll leave it at that. So for the sake of keeping the scene running as smooth as possible, and the sanity of the members operating, remember why our officers are where they are. They are leaders. Not any Joe Schmoe can just jump in and take the helm. Let them lead. And on the other hand, let everyone do their respective job, and don't jump in unless it's not being accomplished.

I combined these two because most of the time, they go hand-in-hand.  Let's go back to bashing on Joe for a little while.  Joe just started with the department and it's his first real fire.  Eager, and ready to work, he gets off the truck with his mask donned.  While grabbing his tools, pulling his line, and running to the front door, what does he see?  Our buddy Joe Schmoe sees absolutely nothing but a foggy lens, and an outline of a front door that he thinks he's kneeling in front of, awaiting orders from his boss.  His boss is conducting a 360 and securing utilities.  Joe gets excited and goes inside to fight the beast.  Joe is currently spiraling downhill into the depths of the unknown.  Joe never read the smoke, never got a size up of the building, never received orders from his Engine Boss, and never even knew the house wasn't on fire to begin with.  I'm not here to preach why freelancing is bad. We all know what happens. Joe continues to act out, and we all sit here and talk about him. 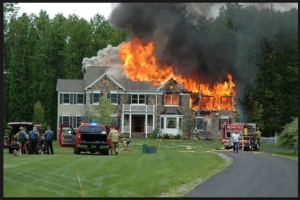 Although very vague, and only hitting the surface, you get my idea.  I’m not here to point my finger at all the Joe Schmoes, because we’ve all been there.  What I am saying is this… if we want to be professionals, we need to learn from our mistakes, and act like it.  Act like your life depends on it, because it does! When you don’t learn from mistakes anymore, you make the same ones over and over. These are just 5 of the Sins that cause fireground failure.  Please come back to visit Station-Pride for the second part to this article that will include the rest of the 10 Deadly Sins.   Stay salty.
– The “Irons”

Ron Givens is a 5th generation firefighter with 14 years on the job. Ron started as a Jr. Firefighter in Union Beach, NJ in 2002 before relocating. Ron currently holds the rank of Engineer/Paramedic with the South Trail Fire District in Ft. Myers, Fl. Ron is also a Division Chief with the Upper Captiva Fire Department on North Captiva Island. Ron is a Fire Officer I, Instructor 2, Live Fire Instructor, and holds an A.S. Degree in Fire Science from Edison State College. Ron is a proud member of the Florida Gulf Coast F.O.O.L.S and IAFF Local 1826. Ron co-founded the fire training page entitled “Shut Up And Train” (SUAT), and looks forward to sharing his knowledge and experience with others on Station-Pride. EBGH – RFB – FTM – DTRT