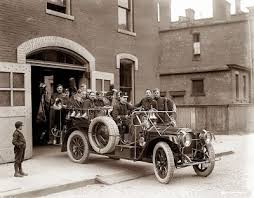 Not long ago I had the opportunity to sit down and talk with an “old” firefighter. Being able to visit with a man who worked as a career firefighter before I was even born was a real treat. During our talk, I started to realize something that I had known all along, but had never really thought about. The fire service has changed. The fire service will keep changing, and I had better learn to keep up.   In the 1960s and 1970s there were more fires to fight due to weaker building codes as well as a lack of fire education and prevention programs. Structure fires were a very common occurrence and these guys did the job without the aid of thermal imaging technology or an air pack on their back. In the 1980s, some of the SCBA technology we have today was beginning to become readily available in its “generation one” form. It was expensive, and wearing an air pack was not looked upon favorably by the culture at the time. And yet we still have all heard the old saying, “we’ve always done it that way.”

We’ve always done it that way. That statement seems so archaic to me. It sounds so closed to new thinking. It doesn’t allow for technology or science to make good changes in how we operate. It is almost a good way to say, “I learned it this way and I refuse to change. And by the way, kid, I’m taking you with me.”   Well guess what folks, we haven’t ALWAYS done anything that way. As a matter of fact, we are doing it much different from how it was done just 20 years ago.

Listening to stories of riding on the tailboard of a fire truck as it responds code 3 to a call is awesome. Knowing people who fought fire wearing rubber coats, and day boots, is at the very least educational for me. Holding your breath as you crawl through a smoke-filled house, waiting for your ears to heat up and tell you that you were close to the fire really sounds like a rush. I am privileged to know some of these men, and I have the utmost respect for those who fought fire and lived through this era. But there is no place for these things in today’s fire service.

In 2005, I lost a friend in a LODD because he wasn’t wearing a seatbelt. I think about that event, and how it could’ve been different every day. Shortly after his death, the culture in the fire service took notice and the National Seatbelt Pledge came into being. Yet, even in 2014 a firefighter was killed when he was ejected while responding to an incident, NOT WEARING A SEATBELT. How is this possible? “We’ve always done it that way.”

I am privileged to be an instructor at our local fire academy. One of the subjects that I teach is Firefighter Safety. During this class, I try to explain this concept: Our perception of what is safe is bred by our experience. That means if you are a 35 year veteran of the fire service and have ridden the tailboard to every call without incident, then you probably hold the belief that riding the tailboard is safe. The same thing is true of many parts of this job. Freelancing, improper use of PPE, seatbelts – the list goes on and on!

Two examples of the “we have always done it that way” attitude scream out at me: Detroit MI, and Hartford CT. I am using these two examples only because of the very high amount of media coverage given to each.

First, let’s look at Detroit. The highly popular movie filmed in this city called “Burn” was brought to my attention about a year ago. A very young member of our department was speaking highly of the movie, had a copy of it with him, and offered to let the crew watch it. As the movie unfolded I saw a department unwilling to change how they operated no matter what. Injury of personnel, loss of equipment, and even direct orders from the Chief were not enough to override “we have always done it that way.”

Hartford, CT was in the news not too long ago. It has been credibly reported that the use of a Nomex hood in HFD was optional. OPTIONAL! WHAT? How does an essential piece of firefighting PPE, widely in use since the 1970s, and mandated by NFPA standards become optional? The answer to this question is the same as the answer to so many of the failures that we continue to embrace in the name of tradition. “We have always done it that way.”

I truly love fire service traditions. I am an active member of our department’s Pipes and Drums Corps; its purpose is to honor the memories of the fallen, and to uphold the traditional values that make the fire service the best job in the world. I enjoy washing a brand new apparatus for the first time, and pushing it back into the station. I support having logos that set fire stations apart and give the crews working there a feeling of pride and honor. Class A dress uniforms being available for members to purchase is another traditional fire service “thing” that I love. I love lighthearted pranks or jokes that make 24 hours pass more quickly, or a bowl of ice cream eaten because the rookie made his first interior attack. Those are the types of “traditions” I hold dear. However, I want no part of the irresponsible acts that some of us call tradition. We all need to step back, and take a hard look at our department’s specific culture. The things that we do in the name of “tradition” must be able to pass the test of “reasonable and responsible.”

I challenge you to remove “We have always done it that way” from your answer bank, and find the real answer to the question. I also challenge you to be wary of this answer, and the people giving it.

4 Comments on We’ve Always Done it That Way